I recently moved into an older house, built in the late 1920s. As I've started working my way through repairs and restorations, finding helpful resources on how to repair glass knobs that have come loose in their shank has been somewhere between difficult and impossible. On the decidedly less-helpful side are articles like this one, from This Old House, which definitively claim that the problem is unfixable. Others, like the DIY StackExchange, have had more helpful suggestions. But most of the discussion has been around how to fix the immediate problem, and not what causes it to occur, or why a given fix is likely to work or fail over time.

Short of actually disassembling a glass knob (not recommended, you're unlikely to be able to reassemble it again afterwards), there is little easily available relating to the construction of these doorknobs. If we go back to US Patent Number 1,059,659 for the Glass-knob shank, most older homes in the US will have knobs that were manufactured in a way similar to what is described there.

The inventor describes four major components to the glass knob: 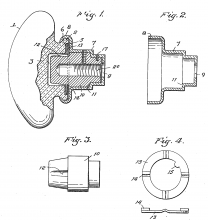 In this design, both the bottom of the glass knob and top of the annular ring have lugs or raised feet/teeth which interlock and prevent movement. The annular ring additionally has an inwardly facing lug which fits into a groove machined into the solid metal plug, also preventing movement. These three pieces are contained within the metal shank, and a small rod is drilled through the shank and into the plug to secure the two together.

Of the knobs I've seen, most have used a simplified design where the plug and shank are combined into a single machined piece. This can be roughly pictured as:

As you can see, there is a hexagonally shaped ring securing the knob to the shank. Between the ring and the knob, a series of raised teeth are used to interlock with and secure the knob (the glass having a corresponding pattern stamped into its underside). The ring then fits over the raised hexagonal lug protruding from the surface of the shank. Excess metal around the edge of the shank is stamped over top the foot of the glass knob to form a lip which prevents the knob from falling off.

Based on this design, it seems like there are several different ways in which the glass knob can come loose and start wiggling or freely spinning within the shank:

I don't know that any is strictly more or less likely than another, although my guess is that the above list is ordered roughly by likelihood of occurrence.

A common fix is to attempt to re-form the lip of the shank so that it applies sufficient pressure such that the knob engages with the teeth of the securing ring. Unfortunately this is often destructive to the doorknob: hammers and glass aren't great friends. The shank is also not the most pliable and you're generally liable to leave an unsightly dent in its lip even if you manage to not break the glass knob itself.

A less destructive option is to apply a clear epoxy, super glue, or similar. This can be done either by applying it to the joint between the knob and the shank lip and allowing it to wick downwards, or by carefully drilling up from the spindle hole of the shank, and through the securing ring. You can then inject glue or epoxy into the cavity between the ring and glass knob. This approach does also carry the risk of damaging the glass if you aren't careful.

A third approach is to just screw the spindle in further. This assumes that you have a sufficiently long spindle, but because the threaded hole extends cleanly through the entire body of the shank, you can use the pressure from the spindle pushing up into the securing ring to force all of the components tight again. This method is non-destructive, but it does require a specific type of doorknob construction and may not be compatible with all variations.

Overall though, glue or epoxy seems like the best route that I've been able to find. At some point, yes, it will fail. When that happens, you can likely use acetone to remove enough of the binder that you can just reapply more and be good to go. Unfortunately none of these methods is perfect, and depending on how much use the handle sees, the repairs may not be as long lasting as you'd like. Even still, they should extend the serviceable life of your vintage doorknobs fairly considerably.

Projects
None
Subscribers
None